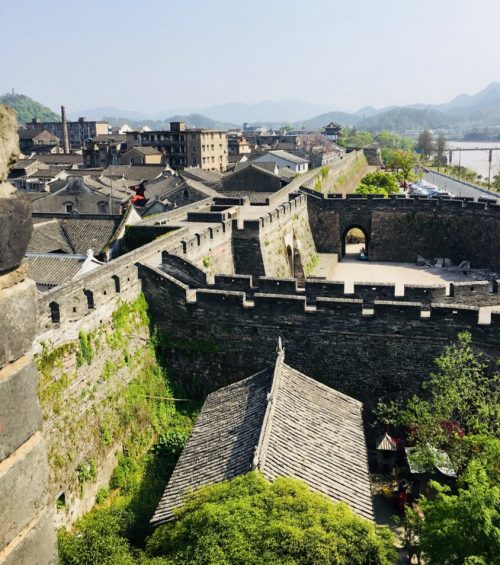 If you have a day to spare, and want to venture outside of Shanghai for a few hours, let me recommend the city of Linhai, China! Linhai is located in the eastern Zhejiang Province. It’s an easy 3 hour, high-speed, train ride from the Hongqiao train station, and half a day is enough time to check out the city’s highlight. Travel tip: I advise buying your return tickets when you purchase your departure tickets, because they do sell out! But don’t fret, Linhai is a very quiet city to visit. During our trip, on a Sunday, there were very few visitors and at times we felt as if we had the entire city to ourselves.

So what is there to do in Linhai? Well…

The #1 attraction in Linhai is the Jiangnan Great Wall, located about 25 minutes from the Linhai train station (take a taxi, didi is not available in Linhai). The wall is commonly known as the Southern Great Wall. And although it may not be as famous as the Beijing Great Wall, Jiangnan was the blue print for its northern counterpart. Dating back more than 1,600 years, the wall was first built in the Jin Dynasty (265-420 AD) and was restored and expanded during many of the dynasties that followed. This Southern Great Wall was built around the city not to just keep enemies out, but to also protect the city from flooding (one-third of the Wall was built along the Ling River).

Now be prepared… Your experience with the Jiangnan Great Wall will begin with a steep, 198 step climb at the front gate.

The stairs are called “Haohan Po,” meaning you will succeed if you can conquer difficulties like these steps.

The climb is not impossible, but definitely take your time getting up and don’t be ashamed to take short breaks as you make your way to the top (I stopped twice…). But once you reach the top, the beauty will make you feel that each step was worth it. It will take about 3 hours to walk from end to end, but the scenery and cultural experiences along the way are breathtaking. High in the misty mountains, surrounded by lush greenery, it’s easy to get lost in the peace and serenity of it all. And at each tower along the way, there are highlights of the city’s rich history (but make sure you have your translator app, as it’s all in Chinese).

At the end of the city wall lies Ziyang Old Street. This 1,080 meter long street is the longest, well-preserved historical block in China. The street is very quiet, and many local residents still keep up their traditional daily routines. I encourage you to take a nice stroll down the street, enjoying the historical preservations, before hailing a taxi and heading back to the train station.

Heads up… the train station is small. There is a restaurant and a convenience store, but not much else. Make sure you pack your battery chargers and water, and be prepared to entertain yourself if you have a long wait before your train ride home.

For those living in Shanghai, and those just passing through, I hope you are now intrigued to pack your backpack, buy your tickets, and enjoy a daytrip in Linhai! You will not be disappointed!